A place so notorious, it's name is synonymous with 'uproar and confusion'. Bedlam- many of us have used the term. Here is the story behind it. A recent article about a macabre but fantastic archeological find in the old footprint of Bedlam can be seen HERE 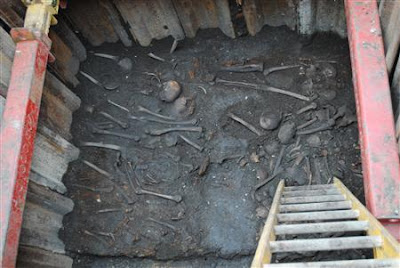 Wiki says: The Bethlem Royal Hospital is a psychiatric hospital located in London, United Kingdom and part of the South London and Maudsley NHS Foundation Trust. Although no longer based at its original location, it is recognised as the world's first and oldest institution to specialise in mental illnesses. It has been variously known as St. Mary Bethlehem, Bethlem Hospital, Bethlehem Hospital and Bedlam.
The Hospital is closely associated with King's College London and in partnership with the King's College London Institute of Psychiatry is a major centre for psychiatric research. It is part of both the King's Health Partners academic health science centre and the NIHR Biomedical Research Centre for Mental Health.
The word bedlam, meaning uproar and confusion, is derived from its name. Although the hospital is now at the forefront of humane psychiatric treatment, for much of its history it was notorious for cruelty and inhumane treatment – the epitome of what the term "madhouse" connotes to the modern reader. 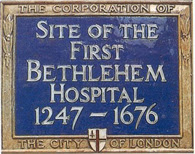 Bethlem has been a part of London since 1247, first as a priory for the sisters and brethren of the Order of the Star of Bethlehem, from where the building took its name. Its first site was in Bishopsgate (where Liverpool Street station now stands). In 1337 it became a hospital, and it admitted some mentally ill patients from 1357, but did not become a dedicated psychiatric hospital until later.
Early sixteenth century maps show Bedlam, next to Bishopsgate, as a courtyard with a few stone buildings, a church and a garden. Conditions were consistently dreadful, and the care amounted to little more than restraint. There were 31 patients and the noise was "so hideous, so great; that they are more able to drive a man that hath his wits rather out of them." Violent or dangerous patients were manacled and chained to the floor or wall. Some were allowed to leave, and licensed to beg.
It was a Royal hospital, but controlled by the City of London after 1557, and managed by the Governors of Bridewell. Day to day management was in the hands of a Keeper, who received payment for each patient from their parish, livery company, or relatives. In 1598 an inspection showed neglect; the "Great Vault" (cesspit) badly needed emptying, and the kitchen drains needed replacing. There were 20 patients there, one of whom had been there over 25 years.
In 1620, patients of Bethlem banded together and sent a "Petition of the Poor Distracted People in the House of Bedlam (concerned with conditions for inmates)" to the House of Lords. 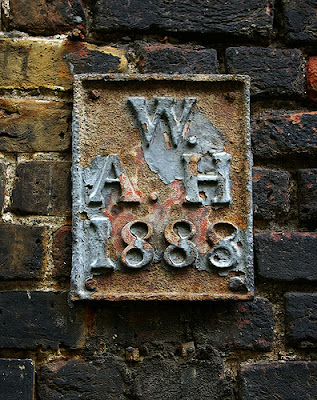 The Hospital became famous and notorious for the brutal ill-treatment meted out to the mentally ill. In 1675 Bedlam moved to new buildings in Moorfields designed by Robert Hooke, outside the City boundary. The playwright Nathaniel Lee was incarcerated there for five years, reporting that: "They called me mad, and I called them mad, and damn them, they outvoted me."
The inmates were first called "patients" in 1700, and "curable" and "incurable" wards were opened in 1725-34. In the 18th century people used to go to Bedlam to stare at the lunatics. For a penny one could peer into their cells, view the freaks of the "show of Bethlehem" and laugh at their antics. Entry was free on the first Tuesday of the month. In 1814 alone, there were 96,000 such visits.
More on what it was like inside Bedlam can be found HERE at the Royal College of Physicians.
Posted by ~Wendy~ at 5:00 AM

Fascinating article. Thanks for posting!

Thanks for this article.
I hadn't heard/read much about Bedlam before.

Wow, thanks for the interesting info. I had a rough idea what went on in the building but it's fascinating (in a somewhat twisted way!) to see more detail. Especially interesting as some of my friends actually made a study of things like madness in literature or treatment of female 'hysteria' in the 1800's etc, for University dissertations, so now I can keep up with what they're talking about!

I am currently reading a book called "Bedlam:London and it's mad".I found it very interesting and went searching for info online,and came across your blog,and am glad I did! :)