Gravestone of the Roman Gladiator Diodorus 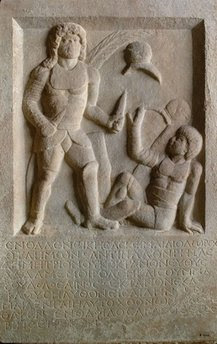 This 1,800 year old tombstone and epitaph tell a story.
An enigmatic message on a Roman gladiator's 1,800-year-old tombstone has finally been decoded, telling a treacherous tale.

The epitaph and art on the tombstone suggest the gladiator, named Diodorus, lost the battle (and his life) due to a referee's error, according to Michael Carter, a professor at Brock University in St. Catharines, Canada. Carter studies gladiator contests and other spectacles in the eastern part of the Roman Empire.
Click HERE to see the whole story!
Posted by ~Wendy~ at 7:04 PM

That's awesome!!!!!!! So much we will never know from history. Fascinating!