Posted by Anonymous at 7:24 AM No comments: 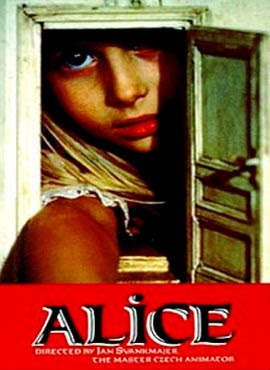 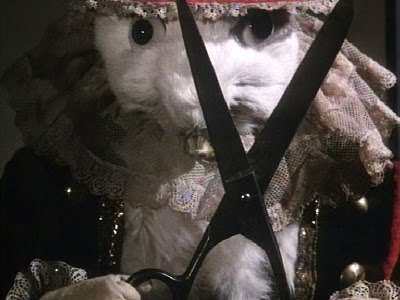 This macabre and wonderfully dark version of the tale of Alice is available as an instant view on Netflix!    If you haven't seen it yet, do! Here is a bit o' wiki info on it.
Alice (Czech: Něco z Alenky) is a 1988 Czech surrealist fantasy film by Jan Švankmajer. It retells Lewis Carroll's first 'Alice' book, Alice's Adventures in Wonderland, in Švankmajer's unique style. The film combines live action with stop motion animation. Alice is played by Kristýna Kohoutová, and the English dubbed version features the voice of Camilla Power.
This retelling of the "Alice" story is continually ambiguous about whether or not Alice is in her real world, or when exactly she crosses over to the "Wonderland". Early in the film, Alice appears to be in her bedroom, when a stuffed rabbit display comes to life and breaks out of its cage. Alice follows it up a large, rocky hill and into the drawer of a writing desk. This leads to a cavern where soon after spying the White Rabbit eating sawdust from a bowl with a spoon, she trips and falls through a bucket and seemingly down an elevator. "Wonderland" itself is a strange mix of a household-like areas with very little concern for consistency of space or size. Its inhabitants tend to be strange mixtures of rubbish and dead animals, such as a bed with bird legs, or a stuffed lizard with glass eyes.

Some characters from the original Alice's Adventures in Wonderland appear in similar, but Švankmajerian, forms, such as a wind-up toy rabbit for the March Hare, or a sock with glass eyes for the Caterpillarand a puppet for the Mad Hatter. Similarly, several sequences from the original story, such as Alice's growing and shrinking via the consumption of unusual food and drink, or the scene in which a crying baby changes into a pig, are portrayed in original forms. For example, when Alice shrinks, she is transformed into a doll which looks fairly similar to her regular self.

The movie also contains a number of original sequences not related to the original novel. In one such sequence, Alice is trapped inside a doll-like shell, after being made to walk into a bowl of milk while in her shrunken form, and is locked in a food closet. The Queen's character is also changed somewhat, in that her execution sentences are carried out by the White Rabbit with a pair of scissors.

When the movie ends, it is ambiguous whether everything that happened to Alice was indeed real, or if she is still dreaming. She wakes in her room, but then finds that the white rabbit is still missing from his cage, and finds a secret compartment where he keeps his scissors. She ponders whether or not she will cut his head off.

The visuals are often described as grotesque, perverse, or disturbing, but overall not repulsive. Prominent is the stuffed white rabbit, whose chest is constantly leaking so that he has to keep eating sawdust, various living animal skulls, and a moving slab of meat. There are a number of visual puns. Scissors and knives are also recurring themes. Alice herself narrates the dialogue of all the other characters in the film. 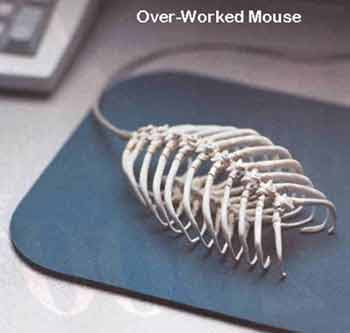 Ring around the Rosy 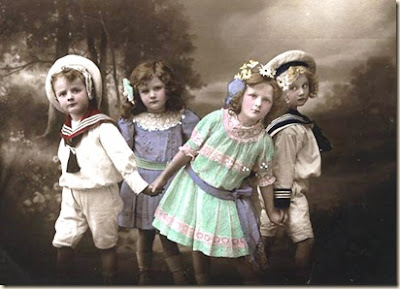 Many Nursery Rhymes have darker origins. Ring around the Rosy as it is more commonly known here in the USA is a great example. In the version most known here in the South/West USA the words are:
Ring around the Rosy
A pocketful of posies
Ashes, Ashes
We all fall down
North/ East USA and Europe more commonly sing
Ring a Ring o'rosies
A pocket full of posies
A-tishoo, A-tishoo
We all fall down
This historical rhyme dates back to approximately the Great Plague/Black Plague of London in 1665 (bubonic plague)  The symptoms of the plague included a rosy red rash in the shape of a ring on the skin (Ring around the rosy). Pockets and pouches were filled with sweet smelling herbs ( or posies) which were carried due to the belief that the disease was transmitted by bad smells. The term "Ashes Ashes" refers to the cremation of the dead. The English version of "Ring around the rosy" replaces Ashes with (A-tishoo, A-tishoo) as violent sneezing was another symptom of the disease. 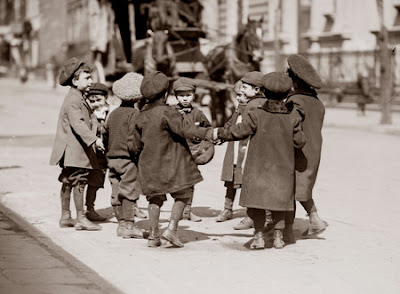 Sadly however, your body doesn't really make a loud BUZZ noise if someone sticks a pair of tweezers into any open orifice. That would be cool, though...
Posted by Anonymous at 2:26 PM 3 comments:

Happy 4th of July to all! In the spirit of Independence day and Gothic Tea Society, I thought I would mention a few ghost stories that surround Ft. Jackson, South Carolina. I'm not sure as to how true they actually are, but I discovered them in "Ghosts of the South Carolina Midlands." 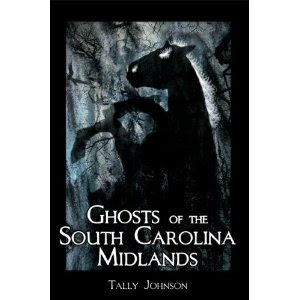 The first ghost story is that of a young girl that tragically killed herself. She's seen on the artillery range with a hole in her helmet. Strange thing is why would she have head gear on if she were to kill herself? Something to ponder on. Another ghost is seen in the B company 369th AG barracks. He's a shadowy figure who makes sure his soldiers are in bed, goes to the bathroom, closes the door and never returns.

There's also a rich ghost history in Columbia, itself. Of course, we have the story of the Congaree River Bridge being haunted by a young girl who hitchhikes and asks her benefactor who picks her up to take her to her home and disappears in the car on the way there. There's also a very interesting haunting of the Longstreet Theater. 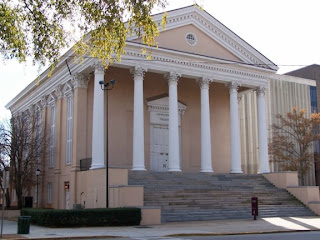 The Longstreet Theater
"The haunting of Longstreet Theatre relates directly to it's history of being used as a military hospital during the Civil War. It has long been rumored the morgue was housed in the basement of this building in a room that now serves as the "Green Room" for the theatre. The "Green Room" actually is three barrelvaulted alcoves made out of brick. Many stories have circulated among the student population of sightings and strange noises, especially late at night. So convinced are some theatre students, that many refuse to be in the building after dark alone and institute a "buddy system." One student relates a story about being in the theatre late at night for a dress rehearsal and going down to the basement to buy a soda from the vending machine located directly opposite the "Green Room." As the student stood facing the machine, a sudden wave of fear overcame her and she looked over her shoulder towards the Green Room. As she did so, the temperature dropped suddenly and she felt a wall cold air hit her even though there are no windows and the entrance doors to the basement remained closed. The student left in a hurry and later described the feeling as being watched by a negative energy."
(info about the Longstreet Theater taken from strangeusa.com)
Posted by Evil Lily at 1:39 PM 1 comment:


Thanks to Leslie at Alphastamps for finding this.
Posted by Wendy Anderson =i= at 3:44 PM No comments: